A web service is a service provided by an independent separate program that can be called by an application and can be run on different machines. A web service implements an API (Application Programming Interface) to communicate between client and server over a network usually through HTTP. 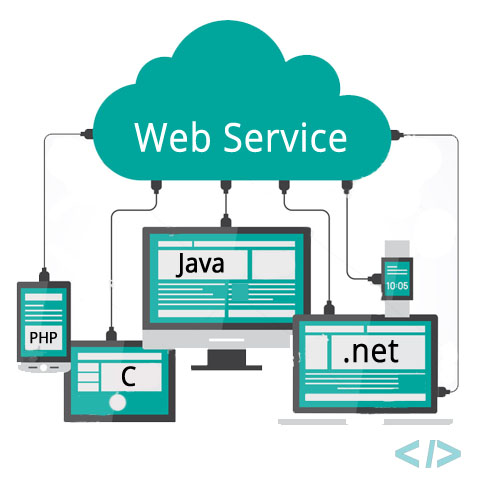 To implement the web services and to perform communication between the devices on the network Service API are used. Service API is the method that handles these communications, such as REST (Representational State Transfer) and gRPC(Google Remote Procedure Call).

So, whenever a RESTful API is called, the server will transfer the client with a representation of the state of the requested resource by the client. The resource is any object that the API can provide data from the server.

Statelessness: REST follows a stateless paradigm, meaning that the server does not store the state of the client.

RPC which stands for Remote Procedure Call is a method which enables program running on one computer on a distributed network make procedure call over the shared network to another device.

IT extends the notion of traditional procedure calling.  The procedure call is also known as a function call or a subroutine call. It also uses the client server model.  In object-oriented programming paradigm, the RPC procedure call is represented as Remote Method Invocation(RMI). It is a synchronous operation which requires the requesting program to be suspended until the output of the current remote procedure has been returned. The implementation of light weight threads allows multiple RPCs to execute parallel.

The concept of RPC has been around for more than half a century.

It is the RPC protocol where the procedure calls are encoded with XML as data format and HTTP as the transport mechanism. It can be implemented with any of the programming languages and also allows cross language communication.  An XML-RPC message is just an HTTP-POST request. They have request and responses.

JSON is a light weighted data exchange format. JSON RPC is a light weighted stateless RPC protocol which uses JSON as the data format. All the data transfer types in JSON-RPC is of single object type, which are serialized using JSON. It is quite similar to XML-RPC. JSON RPC features and allows notifications (message that does not require response) and multiple calls that can be sent to the server.

It is a web service protocol that uses JSON. Inspired from JSON-RPC due to the absence of service description specification with documentation in JSON-RP. The main difference between the two is that JSON-WSP can describe its own service methods. Furthermore, JSON-WSP support attachments in specification.

The new RPC in the tech world currently and the most popular one is gRPC. As, most of the user are shifting towards gRPC currently. Obviously, its super-fast and super effective procedure call system making the data communication process faster is one of the reason for the popularity of gRPC.

As, gPRC is based on http2, so it inherits many features from http2, such as compressing headers, cancellation privilege, persistent single TCP connections, timeout contract between client and server .

Some of the features and benefits of gRPC are listed below:

REST vs gRPC : The Future

For a long time, REST API has been the pillar of web programming. But now, gRPC seems to be replacing REST and encroaching its territory.

Why this is happening you can find in the list below:

In the world full of microservices, the reign of REST is very soon going to be replaced by gRPC with it’s alluring features, performance benefits and ease of development. But, with REST still excelling in publicly exposed APIs and for backward compatibility reasons, it is still going to be around for quite some time.